A Mixtape For Young Entrepreneurs

The audio cassette is essentially a dead technology, but we’re taking it back for a moment to get you ready for your first pitch meeting. 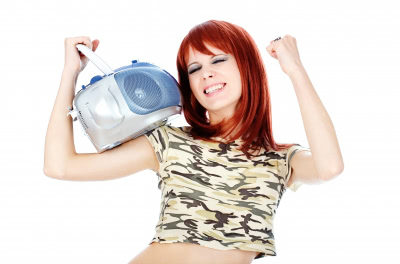 Here are the 9 most inspirational songs for young entrepreneurs:

This song is so inspirational, it was used by the campaign for Bill Clinton during the 1992 and 1996 presidential elections. It’s still played when he shows up for speaking engagements, so I guess it’s now his permanent theme music. It can be difficult to stay passionate or optimistic when raising startup capital, or building an initial network of customers. Most businesses take a few years to start seeing some profit, but Fleetwood Mac reminds us to hang in there and think about future success. It’ll soon be here!

2. You’re Not the Boss of Me Now (They Might Be Giants)

A cathartic piece that’s great for the day you quit your day job, this song is virtually impossible to listen to without getting a warm and fuzzy feeling inside. If nothing else, it’s good incentive to keep planning your company’s launch.

Seal reminds us that crazy ideas can be the best ideas. A few decades ago, Robert Moog decided to take a couple electrical circuits, add a few knobs that could alter their signals, and arrange the sound they made into an intuitive pattern (piano keys). This new creation was the first analog synthesizer. Moog products are now used by professional musicians all over the world, and you’ve almost certainly heard at least one of them. There would be no ‘80s synthpop, techno, West Coast gangsta rap, or even most metal without crazy Robert’s invention. One might say it’s helped numerous artists “survive.” See what I did there?

Everyone needs a track that, despite lacking any meaningful message, just pumps them up in the morning. This one is perfect for the physical training montage in your future biopic film, and you may somehow become stronger, smarter, and faster by the time it ends.

5. I Have Confidence (The Sound of Music)

Whoa, how did this one get in there? I, uh… I think my little sister might have recorded over… well anyway, Julie Andrews’ rendition of this show tune from “The Sound of Music” is best when coupled with the visual of her young character ambitiously skipping to her new gig as a nanny. It goes without saying that a young entrepreneur must believe in himself or herself as a leader and a manager. Whether that takes putting on a fake smile, or deluding oneself into narcissistic behavior, is conversation for another time.

6. With a Little Help From my Friends (Joe Cocker)

Yeah, I know, The Beatles wrote this one, but the Joe Cocker version is so much cooler to listen to than Ringo’s unimpressive delivery. Any good entrepreneur needs some assistance, even when they’re the one running the show. Cockiness rarely leads to reward, or people liking you. Always remember: for every Ben, there’s a Jerry.

In this Van Halen (or Van Hagar) video, you will be inundated with a ton of stock footage and Snapple bottle-worthy facts that will either motivate you to go out and do something, or make you feel guilty about your lethargic lifestyle. Perhaps this is a good method for separating the go-getters from the benchwarmers. Either way, it certainly gets the blood flowing.

Those of us who overanalyze and contemplate the right moment to act on our ideas may find comfort in the thought that there is never a “right” time. There will always be obstacles, or stressors, that keep us from taking important risks. This song from John Mayer’s 2001 album, Room For Squares, refers to people who go through years of school and a series of jobs in order to succeed in life. Apparently, these people “read all the books, but they can’t find the answers.” Sometimes, only experience can help us learn to be successful. There’s no waiting for the “real world.”

9. Save It For Later (English Beat)

While you’re all energized and excited about your new venture, it’s still important to stay grounded and understand the value of restraint. The more money you can save in the production or distribution of your product or service, without sacrificing quality, the better.