Cellhelmet founders Mike Kane and David Artuso pitched their service — a cell phone protection company — to investors in the Shark Tank during Season 4. They came in seeking a $160,000 investment for 20-percent equity.

“Cellhelmet is the world’s first and only brand of accessories to include a safety net of accidental damage coverage for your mobile device,” Kane said on the show.

The founders executed a great presentation, accurately demonstrating how cell phone accessories and insurance companies just don’t go hand and hand, and some companies go as far as making promises that aren’t true—such as claiming their phones can withstand the weight of an anchor.

Despite Cellhelmet’s deliverance, it was a no-grab for the Sharks.

“You guys are nothing – burgers in this space,” said Shark Kevin O’Leary. “I hate your business model so much, I have to punish you.” 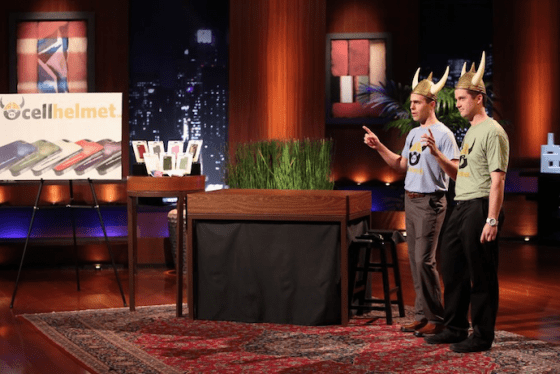 Like a handful of  “Shark Tank” rejects, the founders of Cellhelmet left with no deal, but they are not only satisfied with the outcome, they’re thrilled by it. Prior to the show, about 1,300 units were sold online in total, and the airing of the showed doubled sales within 24 hours.

Since the show appeared on television, the’ve scored a deal with Eldridge Communications—a Verizon Wireless retailer—for an undisclosed investment and a distribution deal that put the product on the shelves of 15 stores.

We had a Q&A session with Cellhelmet founder Mike Kane, and here’s what he had to say about the business and appearing on the show:

If you had gotten a deal in the Shark Tank, who would you have preferred to do a deal with and why?

We’re happy that we didn’t get a deal on the show, but if I’d have to choose one, I’d certainly go with Mr. Cuban. He has a great young attitude on business and he’s from Pittsburgh (our home town). We got our deal back home and we couldn’t be where we’re at today, if it wasn’t for the chain of events that took place!

Where did you get your new deal?

Our new partners (where we got our funding) own all of the Verizon’s in Pittsburgh. We couldn’t be in any better of a strategic position. None of the Sharks have the roots that we have with our new partners.

From your experience, who is the nicest and toughest Shark?

Surprisingly, Robert was tough! Mr. Wonderful was actually comical; I’d love to jump in the ring with him. Lori was quite a charmer, and I’d love to have a beer with Mark Cuban.

By what percent did your sales increase when the show aired and/or how many more customers did you acquire?

We had a big spike the week of our initial airing, but so many doors were kicked down that week on a retail level and we’ve been tackling those opportunities since. Without putting numbers in it, the show was a blessing for business.

What advice would you give to others going on the Shark Tank?

Prepare. Nothing will be left unturned; I promise.

How have sales been since going on the Shark Tank?

Absolutely wonderful. We had an initial spike from our first and second airing of the show, but more than anything, the show provided countless opportunities for cellhelmet.

What was the application/pitch process for Shark Tank like?

Strenuous and long. We launched on Kickstarter in early 2012, so we got lots of attention right out of the gate. They had originally reached out to us, but we had a lot to prove and it wasn’t a walk in the park. There was a lot of back and forth.  There was a lot of preparation over a 5-month span. We had to show them that we were good for TV! I can’t get too much more in depth about the process.

How did you prepare for the show behind the scenes?

Lots and lots of late nights. I really got to know my partners in the months leading up to the pitch. The entire Shark Tank crew was amazing and they truly, truly take care of the entrepreneurs that walk onto the stage. From the minute we arrived til the minute we left, we felt at home.

Describe the day of filming and being in the room with the Sharks.

Surreal — there’s no other word to describe it. I’ve been watching the show since season 1 with my girlfriend and it was truly weird being on stage. To be honest, I don’t remember much from the day we pitched because there was way too much adrenaline flowing.

How long was the Q&A with sharks in real life vs. the show?

We were in the Tank for just about an hour, meaning about 50 minutes were edited out. To be honest, I don’t have the best recollection of what was asked, that ended up going un-aired. Regardless, we walked out feeling very comfortable with the outcome. I’d say it went pretty well in real life.

What was it like for Cellhelmet between filming the show and when it aired?

Stressful. We had no clue how the show would air and we also had some pretty awesome news (we got our deal at home). We wanted to tell everyone the good news, but we had to keep quite. I think I aged a few years in those 5 months.

Did you change any part of your business model after leaving the Tank?

We’re always evolving. It’s a fast moving industry. We recently launched an app for cellhelmet registration, where a customer must perform some device functionality tests on the phone to prove that it’s functional.  We also have launched some new product lines, most recently cellhelmet Repair In-A-Box.  Purchase our box in store (or you can purchase repairs online), drop your broken phone into the box and ship it into our facility for repair.  We have one of the only repair facilities in the nation with guaranteed Level 3 Certified Repair Technicians in house at all times, accompanied by Lifetime Repair Guarantees.