And This Week’s Award For Most Offensive App Goes To…

Incentive based marketing and sales strategies are fairly old hat in the world of business. It’s pretty straightforward, customers and clients like walking away feeling like they both got something. Most strategists think of incentive as a form of motivation, but one app is re-thinking that paradigm. What I can only guess was years upon years of rejection has resulted in an app that allows male users to provide “incentive” to women who they are interested in going on a date with.

Carrot Dating is so named because they feel that bribing women into giving guys the opportunity to take them on a date evens out the playing field for users who have not had much success with other more mainstream online dating sites. This process apparently parallels holding a carrot in front of a donkey face to get it to move.

Now, I can imagine that there are, in fact, nice guys out there just waiting for a chance to meet that special girl, and I can even get behind the notion that they might have to get more creative to achieve that goal. But let’s take a quick inventory at Carrot Dating’s founder’s track record. This gem of a dating site has been brought to us by Brandon Wade, whose other affronts to female empowerment include (but I’m guessing are not limited to) SeekingArrangement.com, SeekingMillionaire.com, and WhatsYourPrice.com. These sites have made Wade a lot of money, and from a startup perspective a success, but I guess the other question we have to ask here is at what price?

Wade says that dating attractive singles is simple, you just need to bribe them. Users of his website offer bribes (the site calls them “carrots”) and singles will choose if they feel like tolerating sitting down to dinner with a troll is worth a new tattoo, a tank of gas, or a paid trip somewhere. No seriously those are all actual “carrots” from the site. Other notable bribes include plastic surgery, skydiving, and even a good old fashioned dinner. 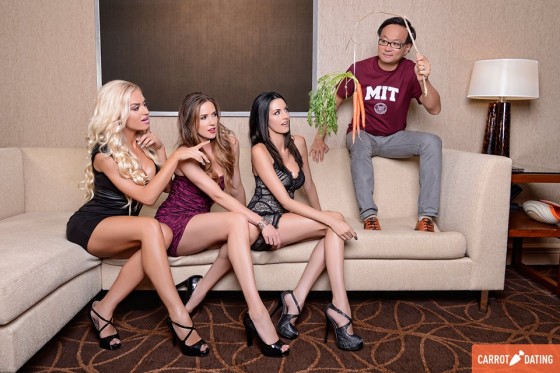 If objectifying women is your thing, or being objectified for all the readers with two X chromosomes out there, then cool. But I have a hunch that this site would make most people feel a little weird. I mean its business model goes one step further than just turning women into objects, by comparing them to animals. I’ll be the first to admit that it is more than a little tragic that it takes an MIT graduate to help some of the less date-able find people to take to dinner, but I’m not sure if this is the best way to go about things.

In an interview with Boston Magazine Wade responds to the allegations of blatant misogyny saying:

“It’s all about breaking the ice and having some fun. I really believe dating is superficial anyways. If you don’t get your foot in the door, you won’t even have a shot. This helps people get their foot in the door.”

Wade has been taking a lot of heat for this app. I’m not totally sure this pushback isn’t all together warranted but I will give one thing to him – he’s got a lot of people talking about what they would do for a date, and how blurry the line between whoring yourself out and accepting a present actually is.