ContentForest: Your Source For Awesome Writers

At the end of last year I had the awesome opportunity to see firsthand what’s going on in the startup scene in Santiago, Chile. I discovered that – thanks to the government-run accelerator program named (aptly) Start-Up Chile – there’s a burgeoning, bustling, badass hive of entrepreneurs down there creating all kinds of industry disruption.

On my very first night in Santiago I had the pleasure of meeting Pravin Daryani, co-founder of the content marketing and production platform ContentForest. Pravin blew me away with his enthusiasm about his business and I knew right away that I wanted to share his story with you guys.

ContentForest is an excellent resource for startup founders in two ways: for sourcing written content and for helping build your own reputations as industry experts. Keep reading for Pravin’s insights on why ContentForest is awesome (and trust me: it is), co-founding with your girlfriend, and a super-cool program run by the New Zealand government.

What inspired you to start ContentForest?

I was running an ad agency called ApeForest. We had clients but there were so many that the whole process was kind of cumbersome to do manage. To scale that up we decided to create ContentForest. Basically the idea is to productize what we were doing for a few clients and do it for thousands and millions of clients.

What’s your background? How did you end up in this field?

The first real business that I started was called MusicTantra. It was a publishing business. I started working on that product when I was 16, so it took off when I was 17.

From there I went a few different routes. I did a lot of technology stuff, design, websites, that kind of thing. Then I got into marketing and I realized that’s where my passion was.

The first product was publishing and now I’m serving the publishing community.

Give me your elevator pitch for ContentForest.

ContentForest is a place where businesses can come and source content for their marketing needs.

Who’s on your team right now? 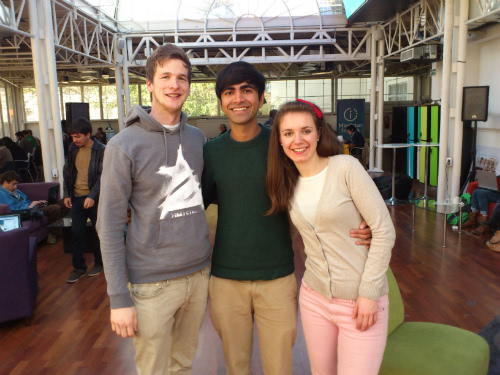 Your girlfriend works with you, right?

Yeah, me and Lena. We’re the management team.

How has it been, working with your significant other? Has that been challenging?

Initially the only hiccup we had was a little conflict on specifics of what should be done but in general I’d say it’s only been positive. I didn’t expect that. When we started working, a lot of people were like, “Oh, are you sure you want to do this?” But it’s been amazing.

Just things like I’ll say, “Let’s do this new thing,” and she says “Spreading in ten different ways is not a good direction,” and stuff like that. It’s not really argument, per se, it’s just not agreeing on a particular point. Then we discuss and see what fits and what goes with the vision of the business in general.

What sets ContentForest apart from your competitors?

When we started the agency I wanted to use a network like ContentForest and since I couldn’t find it, I created it. The whole difference is that we only focus on quality content writers.

We’re very ultra-religious in terms of who we accept as a content producer on our platform.  It’s been so good that 95% of the jobs that we’ve done get accepted in the first draft.

You might see a lot of marketplaces where the writers get paid one dollar for however many words but we don’t do that. We focus on, “If this is a good writer, how much time will the writer take?” So blog posts usually start at around a hundred dollars a piece and writers may take three or four hours.

Also, they’re a topic expert in that field. If they were getting paid hourly, they wouldn’t accept two dollars like you see in some of these other networks. They’re well compensated.

Because of the quality of the writers, the businesses get excellent content that they’re willing to publish. A lot of the clients are big companies doing over a million in business and they wouldn’t publish content that is rehashed or copy-pasted from Wikipedia, which is what you find on these other networks.

For sure. The whole guest-blogging component is definitely part of it.

I know there have been times when I was looking for work and I was like, “Dammit! I don’t want to take five dollars!”

That’s it, that’s exactly the point.

Let’s shift gears a little. How was your experience with Start-Up Chile?

It was fantastic. I think my expectations – because I spoke with quite a few people before I came here – were different. I asked things like, “What’s the difference between Start-Up Chile and like, TechStars for example?” And they said, “Well, you don’t get official mentorship out here.”

But I would say that if it wasn’t for Start-Up Chile we wouldn’t have been able to get the project growing so fast. Before we came we didn’t even have a developer and right now we’re doing really well in terms of sales.

The exciting part begins right now. We have a lot of exciting things coming up but it wouldn’t have happened without Start-Up Chile. Obviously there was the funding, but also the people you meet and the networking you do is amazing. I would recommend it to anyone.

A lot of people in the New Zealand Facebook group asked me about it like, “What do you think of Start-Up Chile? I’ve heard good and bad things about it.” And I was like, “I would recommend it even to my own brother.”

What has been your biggest obstacle so far in getting ContentForest out there?

From doing a lot of things, I’ve learned from trying what doesn’t work and what exactly does work. That’s been an amazing thing in terms of learning.

One of the biggest obstacles was probably when we lost our main developer. What I did incorrectly was not take care of the code and the technology because I was like, let me focus on the customers. What can I do to make more value and more sales?

As a result, we had about a one-month hiccup where nothing new was happening because our developer lost contact with the internet and I had to let him go.

What’s the next step for ContentForest?

We’re working on building an integrated marketing platform. Basically it will be one platform that businesses can use to generate, optimize, and distribute content for their marketing.

We’re back in New Zealand for six months and we’ll actually be headed to the US in August because the New Zealand government is sending us there for a program called Kiwi Landing Pad. That’s very exciting because the US is a main market so it’s important for us to get our name out there. That’s definitely one of the most exciting things coming up.

Where in the States are you going?

So the New Zealand government is paying for that? Is that something you guys applied for or…?

Yeah, the New Zealand government is paying for that. They pay for flights, accommodations, a bit of spending for the conferences, and office space there. They basically connect you to whomever you want to meet in the Valley and the San Francisco startup scene.

That’s really amazing. What do they want back?

Nothing in terms of equity but because it’s a New Zealand company and even ApeForest is doing pretty well in terms of revenue, they want the company to succeed even more resulting in growth of our contribution back to New Zealand.

It sounds like maybe they’re trying to build their startup scene.

Thanks so much for your time, Pravin! Keep up the good work and definitely keep us updated.