When I saw the video for TOHL, I knew immediately that it was something I had to share with you guys. TOHL is a mobile infrastructure company that is disrupting the water access market by providing cheaper, more efficiently delivered water to hard to reach communities. As if that wasn’t awesome enough in itself, they’re doing it through a program we know and love: Start-up Chile.

For those of you who haven’t heard of it yet, Start-up Chile is an incubator based in Santiago, Chile, that was started by the Chilean government. They saw which way the wind was blowing and decided to build a startup ecosystem from pretty much nothing. Now halfway through its second year, Start-up Chile attracts entrepreneurs from around the world for its six month program.

Benjamin Cohen, co-founder of TOHL is one of those entrepreneurs and he and I had a fascinating conversation about how his company is similar to a tech startup, what’s going on down there in Chile, and TOHL’s future plans. This is an inspirational one, guys, and if you like what they’re doing, head over to YouTube and like their video. If they have the most likes by the end of this week, they’re up for $10,000. 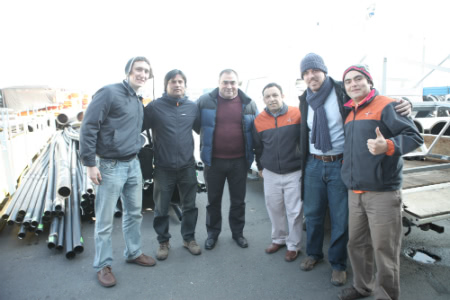 Yeah, it’s mostly tech startups but there are a few hardware startups. Us and a handful of others. Most of the hardware ones are typically social enterprise oriented or green technology. Ours is pretty unique though.

What are they looking for over there? I was under the impression that it was all internet startups.

Well, to get into Start-up Chile, one of the main things is your business has to have high growth potential, like it could potentially be a million dollar company. If it’s something that’s good for Chile and good for the Chilean economy, that’s also a plus.

Can you talk a little bit about your experience with Start-up Chile?

The program has been great. I didn’t know what to expect coming to Chile and participating in a government program like this but it’s been very worthwhile and they give us a lot of support. Any time we need help with something there’s someone I can email or talk to who will help out.

They also have Demo Day so you potentially get to get in front of some investors if you make it far in the Demo Day. We didn’t do that as much because we were more prototyping when we first got here.

The community is really the biggest thing. There’s a Facebook group and everyone is constantly messaging each other and if somebody needs a place to say, they can just type into the page and everyone responds. It’s a pretty tight community.

Would you say that’s the best aspect of Start-up Chile for you?

I think so. The networking and the support and, obviously, the money. That’s a big one.

How are you guys planning on monetizing this? When I was watching the video I was wondering if the idea is that governments will pay for you to go in and do this.

Exactly, yeah. It’s usually government contracts or the mining companies. When we’re looking at the mining companies, there are a couple different options. There’s the social responsibility aspect where they pay for the projects in the rural communities that don’t have easy access to water because around those communities they get a lot of bad PR for using all the water. Also within their operations they have a need for water as well, so TOHL has some uses there.

So it’s a social entrepreneurship business?

It is but, at the same time, for example, the military will have uses for this too. That’s the other thing: we have some interest from some military folks at the Georgia Tech Institute who are working on a grant for us to do some testing there. We’re also talking with the Department of Defense.

It’s a new technology that has a lot of uses. It’s not necessarily just social but we’re definitely focused on social right now.

Are you guys focusing on Chile for now?

Chile is definitely our focus. We’re trying to get a nice, strong, nucleus of operations here in Chile because it’s a strong market; there’s plenty of demand for it. From there we’re doing a TED Talk in India in December so we’re going to check out what the landscape is like there.

I’ve never been there so we have to figure out if it’s a good market or not.

(Laughs) Well, it’s a TEDex Talk but they’re paying for our flight and hotel. 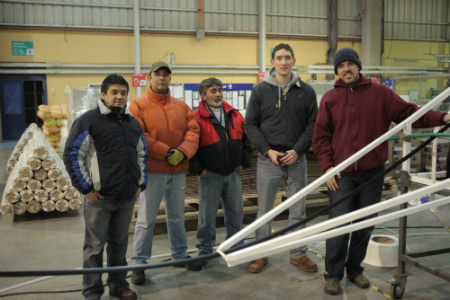 What was your inspiration for getting this going?

That’s when we started to develop technology to quickly install infrastructure. We actually just did a kilometer of tubing in nine minutes and we had flowing water in eight hours.

Our goal is really disaster relief; that’s our primary target. But, in the meantime, while we’re waiting to get into that industry because you can’t just snap your finger and say oh, we have this product! Let’s just start using it. It’s very hard to get into those organizations: disaster response and governments and everything. That’s kind of on the back burner and in the mean time we’re trying to make money by doing installations in rural communities. There’s just so many uses for this technology. 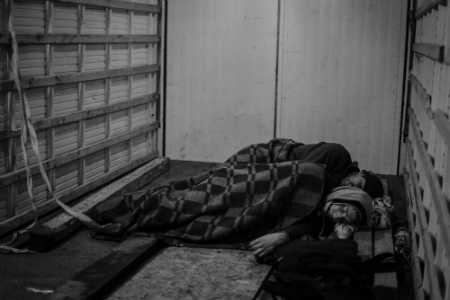 You guys seem like a really young team. You just graduated, right?

Yeah, I graduated from college a year and a half ago; got my undergraduate degree in civil engineering in May of 2011. Apoorv graduated in 2010, Melissa just graduated in 2012 and Travis and Apoorv are still doing their masters. Our core team has shifted around a lot in terms of who’s involved and how much they’re involved but I’m the one who has been primarily dedicated to it, fail or success.

Has the fact that you guys are young brought up any specific issues?

Not particularly because we’re young. The only issue we’ve faced is the fact that Melissa just took a job in Australia with a mining company because we couldn’t pay her what she’s going to go make with that company. She just came out of Georgia Tech, she was a great student, a scholar, and had a great GPA. So it’s not because we’re young but it’s that when you have a young team, people are making decisions and there are a lot of crossroads, so it’s hard to get commitment. I guess that’s the only challenge we face.

My roommate has a background in development and when I showed her what you’re doing, she asked if you guys have a plan for maintaining the pipelines.

We don’t want to get into pipeline maintenance. We want to leave it up to the municipality or whatever entity own the land there. That’s just because it just becomes a big liability for us. We’re more of an installation company. We don’t really want to get into that.

At the same time, with the disaster response, we can remove the pipelines and it leaves zero harmful effects on the environment. That’s an option with this technology.

The point my roommate brought up is that oftentimes, especially with water access projects, when the organization that installed them comes back a year later, they aren’t working anymore because people don’t have the skills and parts to maintain them. Is that something you guys have considered?

We actually work closely with Techo Para Chile. There’s a branch of that called Social Lab that we work closely with; it’s a social enterprise branch. They help us with setting up meetings with the community, informing the residents there, getting them involved, getting them excited about the project. We can’t stay there and maintain it but we can train them on how to do that and the municipal governments obviously have a good knowledge and they do have a small budget for that. 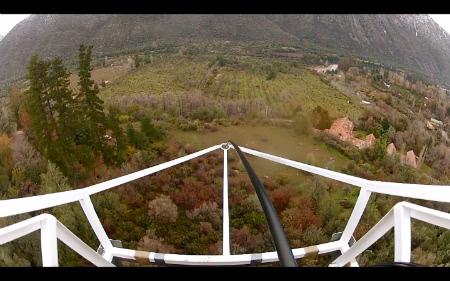 So you’re conscious of that factor and are trying to set up an infrastructure for when you leave, basically.

Yeah, absolutely. That’s very important. We do say that we expect the system to last 20 years but everything has a lifespan and you have to plan for that. Now, Africa, we haven’t been there yet and I think that’s going to be a whole other ball game.

It’s similar, I guess, to a tech startup in that way: responding to your audience, pivoting, adapting. All of those buzzwords we like to throw around.

Definitely. As far as that goes, we’ve had to pivot and we’ve had to shift. If we just sit here and try to push the disaster relief aspect of our technology, then we might go broke before we can actually do it. In the mean time, we’re doing something that makes us some money and something that’s sustainable.

You have to orient it to the market, who’s going to pay for it, to the customer. It is a tech startup in that sense.

Would you say that you’re approaching this more like a tech startup would approach business because you’re at Start-up Chile?

I would say yes because the community we’re surrounded by does effect our decision making process and it does effect what we do. I think it does, but it’s hard for me to find tangible examples of how. I don’t think there’s a direct correlation, necessarily, but subconsciously I guess it does.

What I’m hearing you say is that you guys would probably be following a lean startup model regardless, so being in this environment is helpful because you can be guided in that model.

I think so and I think, more importantly, we’re in an environment where there are startups here trying to bootstrap their tech startups and follow the lean startup model and we kind of end up doing that ourselves, even though it’s a different industry.

How long are you guys planning on being in Chile?

We’ve been here for six months and we’ll be here a little longer. I don’t know how long we’ll be here but I’m here until we have permanent operations established and it’s sustainable. That could be a week or it could be several months or, possibly, longer.

That’s another way it’s similar to a tech startup.

Yeah. I guess maybe the other similarity could be that we’re global and we can be in all different industries all over the world and there’s a lot of demand for it everywhere; it’s not just a localized thing here in Chile. It’s scalable.

I think the Chilean government is doing something really smart with Start-up Chile. There’s a lot of talk about how this kind of business and this kind of business model is really what we need, globally, to jumpstart the economy again. The idea of creating that community out of nothing I think is fascinating and really, really cool.

I definitely agree with that. I think that we need more people to focus on starting companies, on innovation, and this kind of community definitely fosters that. It’s a government stimulus that actually creates capitalism. 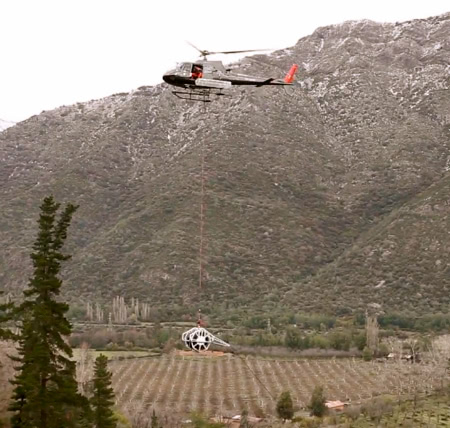 Thanks so much for chatting with me, Ben! I’m super impressed with what you’re doing. Keep up the good work!

(And you, reader, go over to YouTube and like their video if you haven’t done it already! Help these guys out!)

Courtesy of the founder